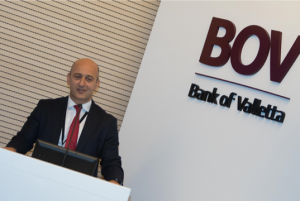 The second progress meeting for 2018 was held at Bank of Valletta Headquarters, Corporate Sponsors of the Malta Maritime Forum. An opening address was delivered by Mr. Kenneth Farrugia, Chief Business Development Officer of Investments at Bank of Valletta. The first presentation by Mr. Albert Frendo focused on a number of Credit Products offered by the Bank, that may be of interest to our members and their associates.

Mr Jason Bongailas followed with an interesting introduction into the ‘Development of the National Maritime Cluster within Malta Marittima’ – the public parallel to the Malta Maritime Forum. Captain David Bugeja, Chief Officer and Harbour Master at Transport Malta, delivered an important presentation relating to the challenges and opportunities relating to ‘Compliance with EU Maritime Ports related Legislation.’

After a short coffee break, Mr Stephen Xuereb CEO of Valletta Cruise Port gave an insightful delivery on ‘Sustaining the Growth and Development of the Cruise Industry in Malta’. Following which, Mr Joseph Bugeja, Chairman and CEO of Transport Malta delivered closing comments to the Progress Meeting. 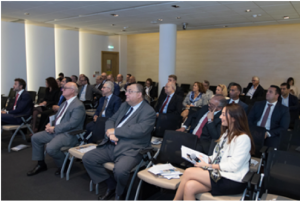 An election was held, in accordance with the Statute of the Forum and the news Directors elected to the Board for the next 3 years were:

During the following Board Meeting, Dr Joe Borg was once again elected as Chairman of the Board as well as Mr Lino Vassallo as Vice Chairman, following their appointments, Mr Mario Mizzi -Tug Malta, was unanimously co-opted as the 9th Director on the Board of the MMF.