The Malta Maritime Forum together with the Chamber of Commerce Enterprise and Industry organized a consultative meeting on Tuesday 16thApril, 2019, on the Grand Harbour Regeneration Plan Project being conducted by the Ministry of Transport, Infrastructure and Capital Projects together with the concerned Public Authorities. Members and other interested stakeholders were invited for this consultative meeting. Representatives from the said Ministry and from Transport Malta, Infrastructure Malta and the Customs Authority were also invited to attend. 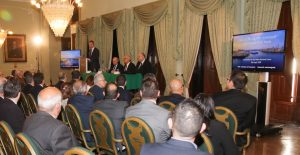 The session was opened by the President of the Chamber of Commerce, Mr David Xuereb, who was pleased to see such a healthy attendance and expressed his full support for the local Maritime Industry. Mr Godwin Xerri, Board Member of the Forum, then gave a concise but highly informative presentation on the current condition of the Grand Harbour, conveying statistics, local plans and the various different operations that are currently being undertaken.

Mr Michael Callus, CEO of the Forum, acted as a moderator during the open discussion that followed. He noted that the scope of this meeting was to have all persons with a business interest in the Grand Harbour openly express their views on the Grand Harbour Regeneration Plan.

The stakeholders raised a number of matters that they hoped to see included within the Regeneration Plan. Amongst others, mention was made of the need for:

Upon the conclusion of the discussions, the Chairman of Transport Malta, Mr Joseph Bugeja offered to make a few comments on the points raised by the floor. He provided an insight into Government’s intention to work out a way forward for the long term by addressing all the issues that port operators are currently facing. He explained that Transport Malta is acting as a regulator, while Infrastructure Malta has been tasked with the marine infrastructural works. He also remarked that the issues faced are not limited to the Grand Harbour but extend beyond its area. Mr Bugeja spoke of the existing congestion at Laboratory Wharf, congestions and the need to have additional Ro-Ro berths, the issues related to the deep water quay for cruise business, the Valletta passenger hub service via the fast ferry short sea transport, wave control in the Grand Harbour as well as other socio-economic issues. Mr Bugeja expressed his satisfaction for the industry’s involvement in healthy discussions at a local level and thanked the Malta Maritime Forum for being at the forefront of such an initiative.

Dr Joe Borg, Chairman of the Malta Maritime Forum closed the meeting by thanking all those in attendance and gave a brief summary of the issues that were raised during the session. Dr Borg also informed those present that the Malta Maritime Forum will be compiling a list of proposals to be submitted to the relevant authorities. He made a call for all those interested to submit their positions to the Forum. He concluded by thanking the authorities and stakeholders for their participation and was glad to see all sides of the industry working together. The Forum’s contribution to the discussion on the Grand Harbour Regeneration Plan was met with appreciation from all those concerned. Such contribution is instrumental for the fulfillment of a truly Maritime Malta. The Malta Maritime Forum intends to keep stakeholders informed on the progress made on the Grand Harbour Regeneration Plan as well as on developments in general relating to the Maltese maritime sector.